I’m working on a new youth led art gallery in the Funk Zone of Santa Barbara. It’s called YI Creative Studio and it’s a program from the non profit Youth Interactive. Our first show is coming up in October and the youth artists choose the theme, Cartoons that have impacted your life. Many of the emerging artists involved in the show have been working together on commission projects for some time. Their work has been covered by local news and received good attention from the greater community.

The youth gallery is a transformational experience for everyone involved. It connects emerging artists with mentors and engages the surrounding businesses with it’s live demonstrations and public art pieces. If you would like to see more about the gallery, come to our first show in October, please visit the website or follow the progress on Facebook. 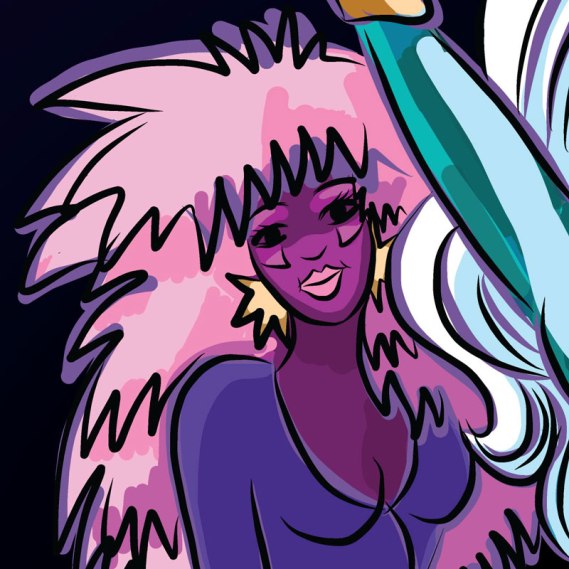 Creating an art gallery requires a lot of work and a synergistic team effort. I thought it would be fitting to draw Synergy from the cartoon, Jem and the Holograms. I grew up in the 80’s and this cartoon was one that impacted my life. In getting started on the drawing I watched several of the music videos that are on you tube. Below is one that inspired the focus on Synergy.

I think of Jem a like Superman. She is a normal person named Jerrica and has an alter ego, Jem the Superstar. In addition she has these star earrings connected to Synergy – a magical character / super computer. I immediately connected Synergy (who has the power video) with Inanna – ancient goddess of the Earth and Sky. Inanna got most of her powers from her father and she is represented by a star shape.

Originally my idea was to represent a trinity of females based on the Jem cartoon. I could have shown Jem with Synergy and her shadow figure from the rival “Misfits” band, but I didn’t. I decided to represent Jem as the creative side, Jerrica as the logical side, and Synergy as the spiritual side. Together they form one and I think that’s a powerful image to think about for a cartoon.

I used the adobe ideas app with a nomad brush to create the sketched on my iPad. 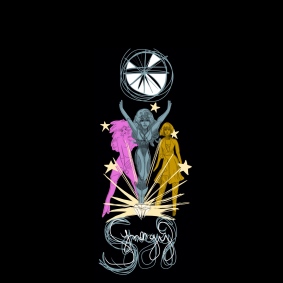 I wanted to get the image as close to the original Jem imagery as possible because I am pushing it a bit with the colors and the layout.

The upcoming show is going to be a lot of fun – come see the final work in person and check out all the amazing artists! Read more about the upcoming October 18th show “Cartoons that have impacted your life“.

4 replies to Drawing cartoon inspired by ‘Jem and the Holograms’