My film, Earth Mother, Sky God Weep for Tragic Love, is an animated story inspired in general by Shakespeare’s tragic love stories and specifically by the final scene of Romeo and Juliet. The film I made speaks about love and death in a new way by comparing Shakespeare’s drama to American art history and asking the question, “Is it possible to witness death without sorrow?”

The landscape in my film resembles a design pattern used in American mourning paintings. These paintings were the key to unlocking my own inexplicable fascination with love and death. Samuel Folwell, a Philadelphia artist, created the first American mourning painting titled, “Sacred to the Memory of the Illustrious Washington,” in 1800, after the death of George Washington. His painting was apparently the first in a long series commemorating the president. (Schorsch, 1979)

I discovered American mourning paintings by searching for information about the elements in my film: birds, clouds, moons, and goddesses. Although each element is meaningful, I have chosen to focus on the significance of the Earth Mother/grieving woman in this paper. Schorsch (1979) expresses something similar when he writes:

Folwell’s small scene . . . lyrical, and logical . . . suggest(s) eternity­—a Devine kingdom. . . . The special beauty of the Kingdom, one Washington helped to provide for America, also surfaced—freedom . . . the grieving woman in the center of the Folwell landscape represents such freedom. She is the goddess Liberty. . . . She embodies the imperfectability of mankind. And since grief is a human characteristic it follows that the visible symbols of grief have been feminine also. (Schorsch, 1979, p. 60–63) 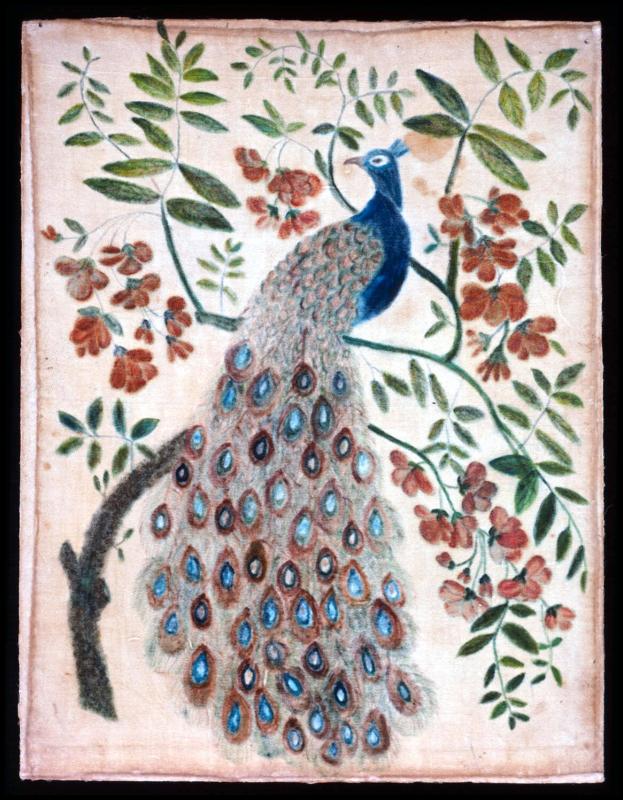 I mentioned at the start of this paper that mourning paintings were the key to understanding my inexplicable fascination with the themes of love and death in Shakespeare’s plays. The paintings linked the sorrow of these tragic love stories to an experience I had this summer when my friend passed away. In personally experiencing the death of a friend, I felt sorrow as a witness to his passing, similar to the feelings of sorrow I experienced the first time I watched Romeo and Juliet. However, in my experience I also felt joy at the moment of death because I sensed the joy of the liberation of my friend’s soul. “Folwell’s Liberty (grieving woman) . . . embodies the impulse of ‘religion [to] lead whole realms to worlds of joy/undying peace and bliss without alloy’ . . . a sacred personification as Liberty could welcome death ‘with the greatest comfort and joy’” (Schorsch, 1979, p. 62).

Connecting Shakespeare to Washington in this particular way through my film has been extremely meaningful to me. Experiencing opposing emotions, back to back like two sides of a coin, is difficult but natural. This union of opposites is a pattern that connects on many levels. Juliet and Romeo connected opposing houses. Sky and earth are connected spheres. Life and death are connected experiences. Humans and divinity are connected opposites. “Washington’s death formed a bridge between divine sovereignty and humanity and between all that is sacred in death from one generation to another generation, thus creating an archetypical union which might be called mythic, allegorical, apocalyptic, or final” (Schorsch, 1979, p. 70).

Schorsch mentions the terms myth and archetypical union in the quote above. According to Rowland (2012), Jung also defined myth as the result of collaboration between two opposite aspects of the psyche, the conscious and unconscious. The unconscious is the part of the psyche unknown or inaccessible to the conscious part of our psyche concerned with identity. Rowland explains that Jung’s term ‘archetype’ refers to “inherited structuring patterns in the unconscious with potentials for meaning formation and images” (Rowland, 2012, p. 198). So what meaning can I find by looking at Shakespeare’s stories to understand the relationship between sorrow and death?

Although outnumbered three to one by the trinity symbol of numbers, without her—and she completes the number 4—there can be no unity or harmony. Like the urn, which replaced the skull as an alchemical vessel of transformation—vas spiritual—the female holds the promise of new life. (Schorsch, 1979, p. 63)

The mourning woman in this painting is an alchemical symbol with the potential to enable changes in the psyche, like transforming grief into liberation. Jung used the term ‘alchemical symbol’ to describe images that could enable psychological transformations, unlike the basic term ‘symbol,’ which only points to the unknown, as explained by Rowland (2012). In Hamlet, another example of the union of opposites appears when, with death, humanity meets the Divine:

[T]he Earth Goddess is the goddess of death and rebirth, or maiden, matron, and crone. Force the feminine out of the social sphere and she returns as death. . . . So the marriage with the feminine Other that the king needs is finally represented in Hamlet’s loving embrace of death. (Rowland, 2011, p. 39–40)

It was by watching Shakespeare’s plays that I first became curious about the pattern of love and death that kept appearing, even in his comedies. Seeking new knowledge about this subject led me to do a film as an art research project. As Leavy (2008) defines them, “[Art research practice projects] adapt the tenets of the creative arts in order to address social research questions in holistic and engaged ways in which theory and practice are intertwined” (p. 3).

My film starts with some abstractions and builds up to a meaningful image. I have received feedback that its imagery visually conveys a creation story through layering on pieces of a whole image. Recognition begins to emerge as all the image’s pieces are unified, and then the film abruptly ends with a lightning bolt.

My film is inspired by my imagination of what happens after the final scene in Romeo and Juliet as people discuss the sad events:

A gloomy peace this morning with it brings:

The sun for sorrow will not show its head

Go hence to have more talk of these sad things.

Some shall be pardon’d, and some punished,

For never was a story of more woe