I’m deeply filled with graduated for the abundance of love I receive from my family. The family influence appears in my art in various ways. Recently family emerged in a sculptural pyramid form that I call, ‘Ancestor Pyramid’. Looking at the final result from this creative process, the rotating pyramid, I feel a sense of peace in having built something to honor family.

After a creative process has come to an end I have the chance to look at the resulting object and reflect on it’s meaning. Despite the seeming randomness of the creative choices the final image does speak, in a visual language, and becomes fun to dialog with. The elements I look at in image are kind of based on the 5 senses and include; color, shape, movement, texture, and sound – to name a few. I also go through a process of association, amplification, and animation (depth psychology terms) to find deeper connections in the work.

In this sculpture I have a ton of personal associations with the image – because in has literal plaster casts of the faces of the 4 people in my birth family. I used my association with each person to select images out of magazines and collage a side of the pyramid to reflect those qualities. For example, my mom likes to garden, so I put images of the garden on her section of the pyramid.

The animation came in looking at the image and in noticing the ideas that emerge from my imagination. Working with the paster cast faces of family members was incredibly powerful for activating my imagination. While painting my mother’s plaster face I could hear her voice in my head. In the beginning of the process I had no idea how the face casts were going to be displayed. The decision to combine them into a pyramid was, in part, due to the imaginal dialog I had with all 4 of the plaster faces. They seemed most content and safe when placed inside the pyramid shape. 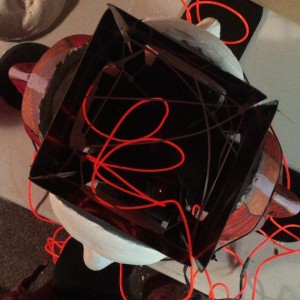 The shape of Egyptian pyramids is thought to represent the primordial mound from which the Egyptians believed the earth was created. The shape of a pyramid is thought to be representative of the descending rays of the sun, and most pyramids were faced with polished, highly reflective white limestone, in order to give them a brilliant appearance when viewed from a distance. (wiki) My pyramid has red sting of light tanged within that pulses with a beat similar to the heart. It rotates by hand and this motion can create a rhythmic sound reminiscent to waves on the beach or breath. It’s very alive.

Mitra Cline is an interdisciplinary artist inspired by spirit, dreams, and the humanities. Her surreal art has a childlike boldness that fearlessly explores. Paintings that capture a state of constant change and transformation.