The connection between what we think and how we see the world is something I think about. As an artist, my work is to play with different perspectives and find fresh ways of seeing the world. By looking back to the oldest stories, the stories/myths about the origin of the world, I get to play with major themes. Here are some recent images that I created while thinking about what unity and diversity look like. In a sense a reinterpretation of the  yin/yang symbol. 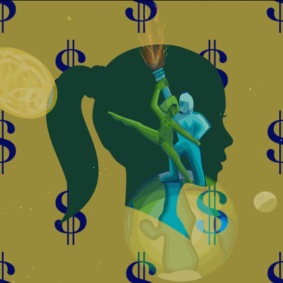 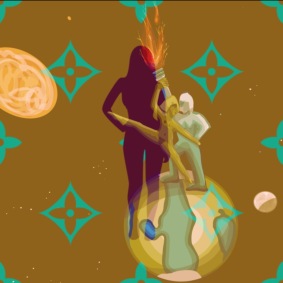 These enduring myths reflect psychological realities and so they remain important today. There are two basic origin myths, Sky Father and Earth Mother. Earth mother came first and was is without gender as the myth is one where everything is connected.

Animate ‘Nature’ is a creature derived from very ancient myth (see Chapter 2), in which the Earth itself is sacred and generative. The Ecocritical Psyche: Literature, Evolutionary Complexity and Jung (p. 9). Taylor and Francis. Kindle Edition.

Sky father myth came second and is a view of separation, where spirit and matter are not connected. For example, the idea of heaven and earth being two different places. There are elements of older myths in the bible too, for example, Adam and Eve were the first people who lived in the Garden of Eden.

The LORD God planted a garden toward the east, in Eden; and there He placed the man whom He had formed. Genesis 2:8

We see part of this garden story also in the older creation myth, that of Inanna (ca. 4000–3100 BC). While the stories are different there is a connection and here is a small section from that myth:

My current virtual exhibit is called “Secret Garden”. Clearly, these myths are occupying my creative mind. It’s nice to have more clarity about them and connect my work with the work of other artists. In particular, the work of eco-critical artists whose work inspires me even more!

Mitra Cline is an interdisciplinary Artist. Spirituality is a central theme because her childhood home burned in a firestorm. For Mitra, art is about making our lives beautiful, inside and out.